SoJo’s Featured in The Mesa Tribune!

SoJo’s Featured in The Mesa Tribune! 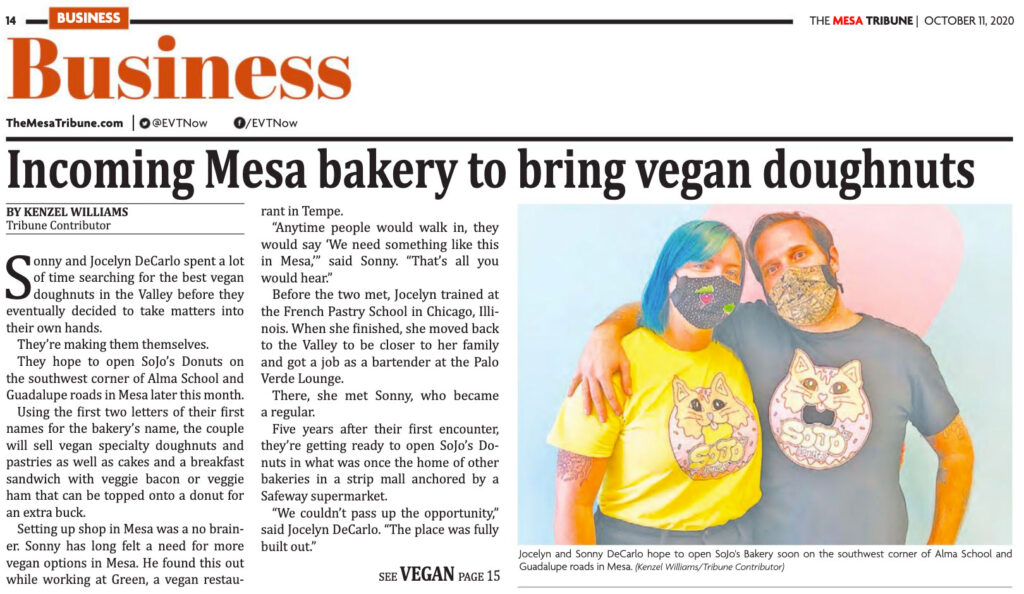 Sonny and Jocelyn DeCarlo spent a lot of time searching for the best vegan doughnuts in the Valley before they eventually decided to take matters into their own hands. They’re making them themselves. They hope to open SoJo’s Donuts on the southwest corner of Alma School and Guadalupe roads in Mesa later this month. Using the first two letters of their first names for the bakery’s name, the couple will sell vegan specialty doughnuts and pastries as well as cakes and a breakfast sandwich with veggie bacon or veggie ham that can be topped onto a donut for an extra buck. Setting up shop in Mesa was a no brain-er. Sonny has long felt a need for more vegan options in Mesa. He found this out while working at Green, a vegan restaurant in Tempe. “Anytime people would walk in, they would say ‘We need something like this in Mesa:” said Sonny. “That’s all you would hear:’ Before the two met, Jocelyn trained at the French Pastry School in Chicago, Illinois. When she finished, she moved back to the Valley to be closer to her family and got a job as a bartender at the Palo Verde Lounge. There, she met Sonny, who became a regular. Five years after their first encounter, they’re getting ready to open SoJo’s Do-nuts in what was once the home of other bakeries in a strip mall anchored by a Safeway supermarket. “We couldn’t pass up the opportunity,” said Jocelyn DeCarlo. “The place was fully built out.”

Sign Up For Our Newsletter and get a FREE Donut on your Birthday!